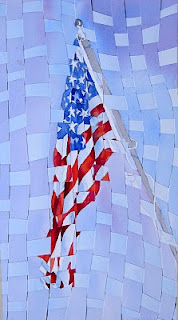 Memorial Day Demo
Our art association has a demo at the monthly meetings and the artist that was going to come, had to cancel, so I offered to do it.
I love to cut paintings up and weave them back together so I decided to do a flag, in honor of Memorial Day that we just celebrated.
To do this, you have to paint 2 of the same composition. I try to vary the values so it will show up more. In one of the paintings, I had a lot of purple in the sky, in the other one,I just had a pale cobalt blue sky. You cut one vertically, and one horizontally, then weave them. I cut these in a wavy line becauseI wanted, or hoped it would look like a waving flag.
at June 02, 2010 8 comments: 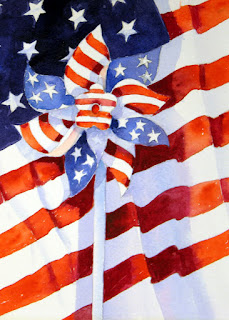 'Parade Memories'
I painted 'Parade Memories' several years ago, after going to a Memorial Day Parade in Hobbs, NM. When Ken was in the Navy, he was in the Admiral's Seabee Band. He played a tuba. He was in the band from 1967-1970 . He was stationed in Port Hueneme, CA.
We were so thankful that he got in the band, and didn't have to go to Viet Nam with his battalion. They told him he could be in the band after his clothes were shipped over. It was a blessing from God that he didn't have to go. He went to all the flights leaving and coming home from Viet Nam. He would let me go with him when they came home, but he wouldn't let me go and watch them leave. It was always so hard for him to see them leave. I remember going to Point Magu one night for a flight coming home, and there was no family members there to greet them as they got off the plane. Only the band playing stars and stripes, etc. When they left they played Anchors Away, and still every time I hear that song I cry! I appreciate so much all the veterans and their families.
I can not even imagine losing a loved one in a war. It has to be so devastating, and there are so many that have. We are so blessed to live in a free America, thanks to those who have served, and for those serving now, no matter where they are!
at May 30, 2010 2 comments: 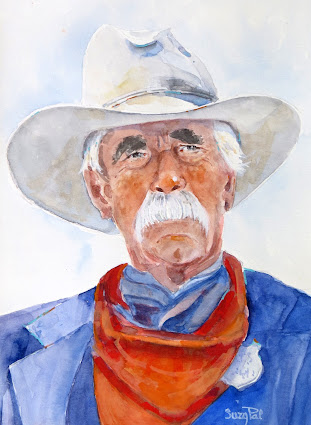